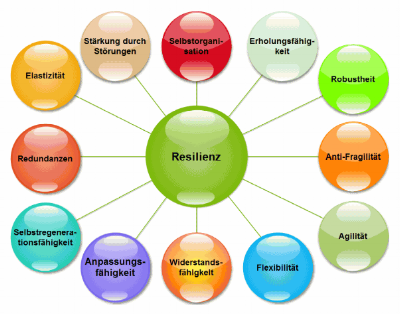 Recently, my attention was drawn to the topic of resilience and how this concept has been taken up differently in the two cultures where I live, the UK and Germany/Austria.

Typing ‘resilience’ into google UK, many initial results lead to news from the banking sector, official governmental websites concerned with risks and emergencies on a national or global level, and luckily also some sites concerned with mental health and other personal aspects of resilience. The word itself seems to me, even if not frequently used, to be more understood in English than in German: people have at least an idea of its meaning (I doubt that many people in Austria or Germany would be able to explain the term ‘Resilienz’).

Starting the same way, by just typing the word ‘Resilienz’ into German google, I found to my surprise that the word is indeed in use: In academia and business and more with a personal health focus, no mention of banks, water crisis or global challenges. I was even more surprised to find out that in fact the first research institution in Europe dedicated to resilience is in Germany.

The German word ‘Resilienz’ (pronounce [ʀeziˈli̯ɛnʦ]) derives from the same latin origin (resilire or resilio– to bounce or spring back) but compared to the English word, it is much less used in day to day language. A synonym that is more widely known and in more common use would be ‘Wiederstandsfähigkeit’, yet this word describes much more the ability to withstand or to resist rather than the ability to bounce back. In this way it describes more the quality of a rock in breakwater, rather than of a solidly rooted tree that bends in a storm. One might say that this subtle semantic difference is not of importance, but I think it points to an unhealthy misconception and direction that the idea of resilience is taken in the German language.

Alan pointed out in his last blog on ‘super-resilience’ (you can read the whole blog here) that resilience is often misused and mistaken as endurance, putting up with more and more pressure. The image of the strong ego-driven, successful individual that can cope with more stress, less sleep and can do more things at the same time is an expression of the unhealthy working culture of our time. But more on that later, back to the RESILIENZ…

The German Resilience Centre (Deutsches Resilienz Zentrum, DRZ website available in English) in Mainz is an interdisciplinary and integrated centre for the research and promotion of resilience, supported by the Johannes Gutenberg University (JGU) and the University Medical Center of the JGU, and funded by the German federal government. The centre tries to combine basic neuroscience, clinical neuroscience and social science to address, as it says on their website, ‘one of the most important public health challenges of modern, knowledge-based societies.’ So there is an acknowledgment of the importance of this topic and of its implications on individual and social life, confirmed by its federal funding, not only for research but to provide a variety of services at their Resilience Health Care Centre as well. Furthermore, workshops, lectures and a list of resilience self-help books are provided and students have the possibility to attend the different formats for free. Wow,… imagine resilience centres connected to hospitals or community spaces. Where people find support and information…

Then, I found several ‘resilience centres’, mainly in West Germany but also one each in Austria and Switzerland. Taking a closer look, they turn out to be coaching and consulting groups, focused on personal coaching, supervision, training and consulting for companies. Generally a positive tendency, as it shows a changing ‘Zeitgeist’ and the recognition of the importance of this theme in our working world.

What disappointed me a bit though was the way in which resilience is presented and talked about. Almost everywhere it is directly linked with performance and productivity, the language in use fits perfectly into corporate settings, yet feels sterile. The focus seems to be on professional intervention in clinical settings. Considering the fact that the institutions who make use of the terms exist and arose from a corporate context this is not surprising and in itself also not reprehensible, yet it leaves me with some discomfort.

Firstly because I think resilience needs to be understood not (only) in an ‘in order to … [be more productive]’ way, but for its own sake. I´m reminded of a famous quote by Howard Thurman, ‘…what the world needs is people who have come alive’ I´m convinced that people who are truly resilient and alive also are more productive, have less absence from work and are more creative and context-responsive in their work. Yet, to put the emphasis on productivity to begin with (and approaching resilience work just as a means) holds the danger of losing this idea of resilience to the corporate world and it being transformed into a fancy but empty concept (as it has happened with the broad philosophical idea of ‘sustainability’ before).

The second thing I´ve been missing whilst exploring the different German institutions and offerings is ‘nature experience’. There has been a lot of scientific research in recent years on the health benefits of interacting in and with nature (see e.g. the research of Berman M. G., et al., University of Chicago ) and it is one of the key elements of the resilience work that I´m involved in through my activities at Hazel Hill Wood and through Wisdom Tree. So I was surprised not to find the words ‘nature’, ‘environment’, ‘the outdoors’. I guess this is what I mean by sterile.

There seems to be a stronger recognition in the UK of the relation between nature experience and physical/mental health and further physical/mental health and resilience. In the German speaking area there is a lot of talk about mindfulness, acceptance, optimism, focus on the future, creativity or self-responsibility, some of which might implicitly include nature, yet there is certainly no explicit focus on this topic as such. Germany, you need to catch up there! So many studies point towards this inextricable relationship yet some of what I found with these consulting companies has quite a dusty flavour to it and doesn´t take these scientific findings into account.

I did find one more project though that I got very excited about. Unsurprisingly it is based in Freiburg, the unofficial Eco-capital of Germany, famous for its student riots in the late sixties, the successful resistance against the construction of a nuclear power plant in the seventies, and a big number of ecological prestigious projects ever since.

‘Resilienz Freiburg’ is part of the centre for children and adolescence research and runs a variety of different projects (many with a focus on pedagogy) Furthermore it offers training for parents and child care professionals and provides material for the facilitation of problem solving and social competencies, dealing with stress, understanding ritual!! and more. This is something I would love to see at school clusters in the UK!

There is certainly a difference in how the two languages and cultures approach the idea of resilience. Whilst the German speaking area hasn´t really picked up on the importance of nature connection in relationship to resilience as much as the UK, there are a few great examples of practical implementation and projects with the intention to support people on a personal level and explore this topic in relation to mental and physical health. The tendency of ‘resilience’ as a sexy, selling term entering the corporate world isn´t unique to either of the countries, I think it only happens at a different pace. I hope scientific studies and enthusiastic people creating valuable lived experiences help us to claim the term and help it to be understood as a quality that is hugely important in itself in the time we live in and a quality that requires the development and strengthening of healthy relationships. With ourselves, each other and the world that surrounds us.

Do doctors have emotions?  What can they do with them?
Using humour to defuse tensions
Can elephants evolve?