I regard Deep Adaptation as one of the most important approaches to the climate crisis, and this new book will give you a thorough grounding in what DA is, and isn’t, and in the various ways it might evolve over the next few years. It’s not easy to define what Deep Adaptation is: I wouldn’t call it a movement, since it is not trying to recruit members or campaign for a specific set of aims. I see DA more as an approach for exploring the climate crisis and related issues, and also as a network offering support and resources: the best gateway is www.deepadaptation.info. The fact that this book is a collection of chapters by different contributors supports this view. 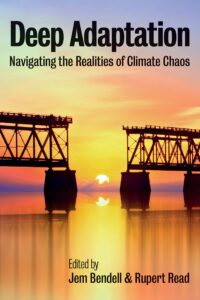 The book is edited by Jem Bendell, who originated the DA approach back in summer 2018, and Rupert Read, a writer and activist who has been a leading figure in the Green Party and Extinction Rebellion. Unlike many such collections, this one is well-organised, avoids duplicated content, and gives a good overview of the insights, uncertainties, and potential of Deep Adaptation currently.

The content of this book is far too rich to try to summarise in one blog, so I will give a gist of each chapter to offer a flavour.

At the end of the book, Jem and Rupert provide a Conclusion, which is in fact appropriately inconclusive. It articulates various ways in which DA could evolve from here, and some of the choices it faces. For example, the pros and cons of trying to share an alarming message much more widely across the population, and whether DA can articulate an image of a ‘better world’, which so many of us need for motivation, given the realities of the outlook. No one could call this an easy or light read, but I urge you to buy the book: you will end up not only better informed, but hopefully better motivated to play a part in the uncertainties ahead.